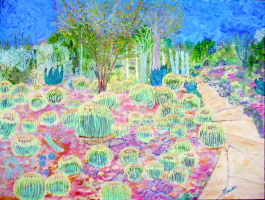 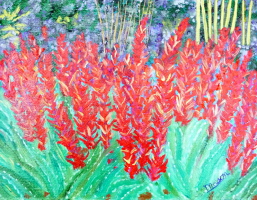 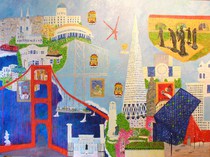 My Impressions of San Francisco

My Impressions of San Francisco

Little cable cars climbing half-way to the stars enticed the artist to imagine an exotic and foreign place that Tony Bennett introduced me to over 40 years ago.  Hearing the song quite frequently paved the way for me in the early sixties to wonder about this town.

In my very impressionable youth Rod Mckuen spoke of Stanyan St. and romance was set ablaze as I cherished the images painted by McKuen. I found the poem Stanyan St. embedded a vast array of feelings that became part of my psyche. Forty years later a chance acquaintance with Chapman Solomon resulted in my visit to San Francisco, on the spur of the moment.  Chap organized a whirlwind visit and I observed the city and its environs including: Stanford University (the Rodins), The Jewish Contemporary Museum, (the Chagall Show), The Legion of Honour (Van Gogh, Chihuly, Mark di Suvero), Lombard St., the Painted Ladies, Transamerica, Sentinel Building, Alcatraz, St. Peter and St. Paul Cathedral, Chinatown, Stanyan St., the cable cars, the Golden Gate, The Bay Bridge, Museum of Modern Art, City Hall, The Symphony, Sausalito (rock sculptures), Coit Tower, and the Heart Sculptures.  In my impressionable autumn years romance continues to fire my spirit.  I Looked and drove down Stanyan Street and created a theme within a theme.  “You lie bent up in embryo sleep below the painting of a blue fisherman without a pillow.  The checkered cover kicked and tangled on the floor. ...A car going by....a fire engine up the hill....The light from the street lamp coming through the shutters.....hysterical patterns flash on the wall sometimes when a car goes by...You’ve  filled completely this first November day with Sausalito...Moving about in the bathroom taking twenty minutes of our precious time....Only the clock moving towards rejection tomorrow breaks the stillness.....Those houses on Pacific that march toward posterity restored by dilettantes from Jackson Square painted up like aging actresses with eye-shadow windows and rouge-red doors....these houses almost shiny new that crowd Nob Hill and marched down Lombard in a row,...the San Francisco wreckers and their yard long hammers.  Their caterpillar treads that transform brick to dust-red powder.  Those giant cranes....”

The City of San Francisco is now one of my favourite cities in the world and continues to inspire me to create artworks.  I can reiterate the words of both Tony Bennett and Rod McKuen.  My heart belongs to San Francisco and unbelievably to me it was more fantastic than all my dreams imagined.

Thank you, Mr. Rod McKuen, for the following beautiful poem of inspiration.

for Glenn and Ellen, Jocelyn and Tony, Flo and Eddie and...

You lie bent up in embryo sleep

below the painting of the blue fisherman

The checkered cover kicked and tangled on the

a car going by

a fire engine up the hill.

I've disentangled myself from you

groping in the dark for cigarettes,

I sit across the room watching you -

the light from the street lamp coming through the

when a car goes by

otherwise there is no change.

Not in the way you lie curled up.

Not in the sounds that never come from you.

Not in the discontent I feel.

ice cream and your wide eyes.

And now unable to sleep

because the day is finally going home

because your sleep has locked me out

I watch you and wonder at you.

I know your face by touch when it's dark

I know the profile of your sleeping face

the sound of you sleeping.

Sometimes I think you were all sound

moving about in the bathroom

I know the hills

and gullys of your body

I have total recall of you

because I know it will be important later.

I have come as far away

as means and mind will take me

trying to forget you.

I have traveled, toured

turned a hundred times in the road

hoping to see you rushing after me.

though half a world away,

I still hear you sigh in several sizes.

The breathing softer when you're satisfied.

The plip-plop body machinery back to normal.

remembering how warm you are

and how defenseless in your sleep

never fails to make me cry.

I cannot bear the thought of you

in someone else's arms

yet imagining you alone is sad.

And in the day

my mind still rides the bridge

I do not think

me and San Francisco

will be friends again

Stanyan Street and other sorrows.

We try so hard to make each other frown

if we haven't been together much too long.

The words that work the wonders are so few

that they seem foolish anymore.

Is this a kind of loving too,

a chocolate bar that tastes good at the time

but kills the dinner later on ?

Could be our appetite will go

till even memory's not a feast.

But there are times

when you can smile in such a way

that I'd forget a ten year war

and lie down in your shadows' shadow

and live on sounds your stomach makes.

In these brief times

I could die against your side

and never make a warning sound

within the circle of your back.

have moved beneath the San Francisco wreckers

and their yard-long hammers.

Their caterpillar treads that transform brick

that slice a roof down

with a single swing.

Some have never known the wreckers' rattle.

Those houses on Pacific that march toward

restored by dilettantes from Jackson Square

with eye-shadow windows and rouge-red doors.

Some have had collections taken up

petitions passed from hand to hand.

and green grass planted where the weeds once grew.

and marched down Lombard in a row

were saved to show the glory of the past.

There was a house on Stanyan street

that took a single day to wreck

and that includes an hour spent

at tin-pail lunch on sandwiches and beer.

They carted off the timber and sold it by the

The bricks at least, ten cents a piece,

But there is little salvage to be had

in bent and broken nails

if I'd had wiser eyes

or been a fisherman 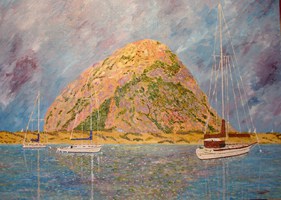 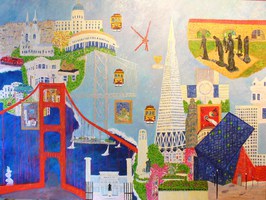 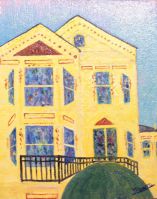 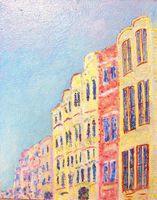 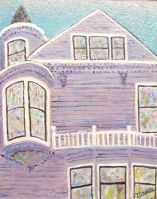 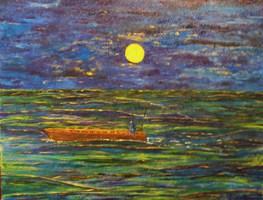 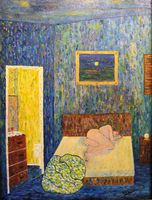