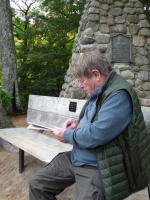 "Canadian artist Patrick Mason paints landscapes and still lifes
in a stunning and evocative impressionist style that cradles
rich and often very subtle colors in delicately swaying lines.
He cites both Van Gogh and Canada’s Group of Seven as major
influences, though his sensibility remains far more intriguing
than a simple meeting of the Old and New worlds. Working
with oil on Masonite lends his materials a roughness which
is softened by his sensitive style of application. He alternates
larger paint daubs and small, short brushstrokes to create
exquisitely textured images of landscapes both verdant and
snowy, and still lifes of incredible formal dexterity.
In addition to his adaptable brush, Mason’s ability to create
variety while maintaining his signature aesthetic attests to a
great appreciation of nature. A lover of Canada’s stunning
national parks since his youth, the artist still often paints
outside, which comes across both in the dramatic vastness of
his landscapes and the studied precision of the details."

I was twenty-three years old doodling on the Sparks Street Mall in Ottawa, Ontario, Canada when a young and very handsome man looked over my shoulder and asked me if I was an art student.  I replied no, that I was only killing time waiting for an appointment as I was a salesman at that time. He suggested that I take lessons at the Ottawa Art Gallery where he was a teacher of life drawing.  I thought about that gentleman and what he said and figured I might be interested in art.  I really knew nothing about art at that time never having studied it at school.  I signed up for the class and Robert S. Hyndman, distinguished Canadian portrait artist, inspired me.  I immediately became consumed with painting and sculpture.  I could only afford that one class and after purchasing oils and brushes I was parsimonious enough not to waste the medium. I read voraciously about art and the famous artists particular those of the Western World.

My friend Barry Moss introduced me to Algonquin Park and I sketched and painted in this, my favorite place in the world. In a few years I had bounced from sales jobs to sales jobs always studying art.  I built a formidable art library and visited art galleries and art shows in New York, Toronto, Montreal, Ottawa and then Paris, France, Amsterdam, Arnham, London England, Chicago, Boston and many places in between.

I became a bus driver when I was 26 years old in Ottawa and settled into a lifestyle of being a single parent of my daughter, Tamara, and painting in any free time that I could find.  I talked incessantly to my passengers every day about art and artists. An elderly lady named Ms. Sally gave me many art books when she downsized her living quarters.  I was totally immersed in painting and increasingly frustrated as I worked and raised my daughter with never enough time for my art.  I read continuously and one day a passenger asked me if I was studying at University.  No one in my family had ever gone to university and that was the furthest thing from my mind.  The query stuck with me and I called Carleton University and I immediately enrolled into Political Science 100. When the term ended I now had another passion.

I took one art History Course as I pursued an Honors Degree in Political Science, a four year degree in 4.5 years while working full time at O.C.Transpo in Ottawa and raising Tamara.  On graduation I went to the University of Ottawa and acquired a Bachelors degree in Education and an Ontario Teachers Certificate. After 13 years of bus driving I became a full time high school teacher with the Ottawa Board of Education teaching Political Science and History, Geography, and the Social Sciences.

I married my wife, Kelly, in 1989. I completed a Masters degree in Education and two specialist certificates in education and continued to teach for 21 years.  At university I specialized in political philosophy and pedagogy.  My interest in student learning and how the brain works enticed me to paint ideas and concepts that I studied at a philosophical level.  I studied psychology in order to understand my students and to help them learn “How” to think rather than “What” to think.  After 21 years in the classroom I retired from teaching to paint full time.

I continue to visit art shows and galleries and study art.  I spend many days in Algonquin Park painting and have been fortunate to work at my art and remain in contact with many of my former students.

I have appeared in the Stittsville Courier, the former Ottawa Journal, The Ottawa Citizen and other regional newspapers. The art magazine, "Art is Spectrum, The Chelsea Perspective" Volume 27. My “Remembrance Day” programs at various schools have been included in the CBC, and CJOH news networks.

Germotte Gallery represents me in Ottawa.